Originally from American Fork Utah, Kristofer Michaels has been active as a musician of a multifaceted nature from about age 13. Kristofer Michaels started piano lessons at age 6 with his mother, but did not take piano lessons very seriously until about age 13 when he began piano lessons with Dr. David Glen Hatch. It was at this time that he decided to practice the piano at least 2 hours a day. His attendence at the Gina Bachauer International Artists competition at this time was very inspirational to him, and he knew after attending the performances therein that he wanted to play the piano at a high level. From very early on, he showed an interest in modern music such as that written by Sergei Prokofiev. He has continued to play Prokofiev’s music to the modern day. In 2004 and 2005, he took part in concert tours given by Dr. David Glen Hatch that explored Poland, Austria, the Czech Republic, and surrouding areas, as well as the Ukraine. For these tours, he performed Prokofiev and Liszt. These tours also had a great influence on him and he learned what it was like to be a performer. Kristofer also studied the piano with Dr. Irene Peery-Fox at this time. After graduating from high school, he began working on his bachelors degree at the University of Utah for piano performance. While at the University of Utah, he studied under the tutelage of Dr. Heather Conner. Kristofer would remain at the University of Utah throughout his study of a masters degree as well. While undergoing his masters degree, he taught keyboarding classes and private lessons for the University of Utah. During his stay at the University of Utah, he was able to win a number of piano competitions resulting in concerto and solo performances. In 2008 he performed Beethoven’s Choral Fantasy with the Utah Philharmonia. That year he would also perform Prokofiev’s piano concerto no. 2 (mov 1) with the Salt Lake Symphony. Soon thereafter he performed Prokofiev’s piano concerto no. 2 (mov 1) with the Couer D’Alene Symphony, as the first prize winner of the 2009 concerto competition. At this time he was also a finalist at the 2009 Isabel Scionti International Piano Concerto Competition in Kingsville, Texas. During approximately this time, he also performed for the Canyonlands New Music Ensemble guest composer series during appearances by Lee Hyla, George Tsontakis, Fred Lerdahl and Shulamit Ran. He also performed new music frequently for students at the University of Utah in a variety of other concerts. He was also a pianist for concerts given by the Salty Cricket New Music Ensemble at approximately this time. At this time he also accompanied many different kinds of musicians, and was a guest vocal accompanist for a choir at the University of Utah. He also performed in master classes given by Murray Perahia, Stephen Beus, Jon Kimura Parker and Jeffrey Kahane. He excelled in new music, but also enjoyed music of the romantic era by composers such as Sergei Rachmaninoff, Robert Schumann and Johannes Brahms.  After completing his master of music degree, he decided to continue his studies and became a doctoral student at the University of Kansas. He would study under the tutelage of Dr. Jack Winerock for the three years during his stay at KU. During this time, he performed at The Catholic University of America and the Kennedy Center, as the winner of the 2014 IYAPC in Washington D.C. He was also the winner of the best performance of new, eastern repertoire that was written by the director of the piano competition. After completing his Doctoral degree, he worked as a ballet accompanist for a time. During his stay at the University of Kansas, he would accompany for a wide variety of different kinds of musicians, especially vocalists. Kristofer Michaels currently lives in Burlington Wyoming where he enjoys teaching piano lessons and accompanying for the local choirs. His hobbies include basketball, jogging, chess, drawing, video games, rock hounding and composition. He considers himself to be an amateur composer, and has studied composition with Dr. Steve Roens, and Dr. Marden Pond. 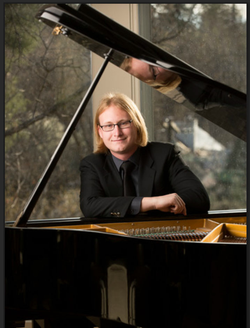