Ed Cook hails from San Diego , where he studied music at USIU and was a top session guitarist in Southern California before moving to Wyoming . He has taught guitar for over 30 years, worked in bands, produced commercials for TV and Radio and writes, plays and produces all the music for the TV show "Best of the West".

Ed Cook has been the guitar and bass instructor at Northwest College for several years. He also teaches the on-line class Music Fundamentals.

In 2007 Ed directed and produced the musical review of "Annie Get Your Gun" with Wendy Corr and plays lead guitar West the band in Cody.

Ed is a versatile guitarist, playing many different styles. He moved to Powell in 1992 with his wife Debra and son Robbie. 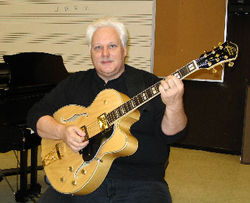