Eric Hagmann is the Vocal Music Instructor - Artist in Residence at Northwest College in Powell, Wyoming, where he directs Collegiate Choir, Vocal Jazz, and teaches applied voice lessons. He holds a Bachelor’s Degree from the University of Minnesota: Duluth where he studied Music Theory and Composition with an emphasis in piano. While there, he received both Departmental Honors and the Music Theory Award for his work.  In June of 2021, he completed his Master’s Degree in Jazz Studies with an emphasis in Jazz Voice at the University of Northern Colorado where he was proud to hold the position of the Vocal Jazz Teaching Assistant for the 2020-2021 school year. Additionally, he was granted the School of Music Outstanding Student Award in Jazz Voice.

Before pursuing graduate school, Eric spent seven years as an adjunct faculty at The College of St. Scholastica in Duluth, MN where he had the privilege of directing Vocal Revolution, a contemporary pop a cappella ensemble. His experience with vocal music runs deep having sung with choirs as early as elementary school. In college, he sang with the Downbeat Award-winning vocal jazz ensemble, Lake Effect, under the direction of mentor Tina Thielen-Gaffey. Toward the end of his undergrad, he cofounded Fermata Nowhere, an a cappella ensemble consisting of fellow vocal jazz members for which he acted as the primary arranger. After graduation, he had the great honor of performing with the Phil Mattson Singers, and he was fortunate to participate in Phil’s final DCINY Vocal Jazz Festival held at Carnegie Hall in New York City. Later, Eric spent four years singing with the Twin Ports Choral Project in Duluth, MN under the direction of Bret Amundson.

Eric’s time at UMD provided him with ways to develop his piano skills which lead to several performance opportunities in his future. For 12 years, he accompanied UMD’s vocal jazz ensembles for auditions, retreats, and concerts. Additionally, he accompanied the high school faction of the Lake Superior Youth Chorus and travelled with them on their 2012 tour through Ireland. He spent two years playing with the Troppo Big Band in Chippewa Falls, WI. While teaching in Duluth, he also performed with the St. Scholastica Jazz Band, and he gigged with the Zenith City Sharps, a local jazz quartet, for one year before moving to Colorado. His most recent side project was playing with The Squalls, a variety group made up of current and former students from UNC.

Arranging has been a long-term passion that has been with Eric since high school. Since then, he has arranged music for other vocal ensembles, show choirs, and he has provided music for UMD’s annual Cabaret show for 10 years. He currently has over 45 published arrangements available on sheetmusicplus.com consisting mostly of contemporary pop a cappella tunes in various voicings. Recently, he has been creating charts specifically for vocal jazz ensembles and building his chops in Logic Pro X to make demo tracks of his work. 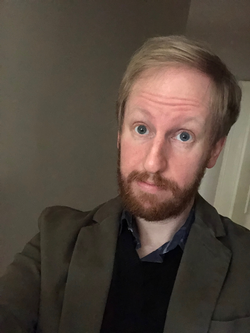