Brady Lowry noticed bear scat as he walked with three fellow Northwest College wrestling teammates along a hillside on the South Fork. They were searching for shed antlers — one of their favorite activities in nearby mountain ranges.

The four close friends chose the school in part due to its proximity to the mountains.

Lowry saw more scat — a lot of it. It was fresh.

“I look up and a grizzly is 5 feet from us, sprinting at me,“ he recalled.

The bear tackled Lowry, a 21-year-old redshirt sophomore from Cedar City, Utah. He said all he could do as the bear stood over him was pray and protect his head.

The bear grabbed his arm, and then bit him in his shoulder and thigh.

Kendell Cummings, of Evanston — his friends call him Kenny — said he was walking a ways behind Lowry. He had seen grizzly scat on previous hikes, but it wasn’t close to the level they were seeing Saturday.

“I’m thinking we were right in their house,” he said.

Then he saw the bear attack. He panicked, first yelling at the bear, then throwing whatever sticks and rocks he could find. The bear was on top of Lowry, covering his body. Cummings decided he had to act and ran up to grab the bear by the ear.

Cummings to the rescue

Grabbing the bear’s ear finally turned its attention off of Lowry. He couldn’t believe what he was seeing.

“It was the scariest thing I’ve ever been through,” Lowry said. “It was nasty, just looking at the bear right in my eyes, it was scary. Kenny was up above me throwing stuff, grabbing and kicking it. Then it got off me and went after him.

Cummings said his attempts by throwing sticks and rocks failed, in his mind he had no other choice than to go after the bear himself.

“I just pulled hard and it kind of looked at me, we locked eyes for a few seconds and I took a few steps back. Then it charged me, took me to the ground,” Cummings said.

He said he couldn’t describe the “once in a lifetime feeling” as the bear knocked him down and started attacking him. Cummings estimated the bear mauled him for about 45 seconds before leaving, at which point he yelled to Lowry to see if he was OK.

That yelling caused the bear to return.

“I heard footsteps again and the bear came back, looked at me, charged me again, tearing me up a second time,” he said. “The second time was longer. The second time it got me good.”

Cummings said the bear focused on his head on the second attack, while he tried to protect his neck. Then the bear left and Cummings had a decision to make.

“I was definitely thinking about just laying there,” he said. “Then I thought again, ‘It’s not my time,’ so I got up again and started walking down to where I thought my buddies were going to be, and they were right there.”

After he was free from the bear, Lowry rushed down the hill screaming for his two friends to help. He said he thought Cummings may be dead.

Orrin Jackson, of Greeley, Colorado, and August Harrison, from Vernal, Utah, had been walking lower on the same ridge to cover more ground while shed hunting. They had found deer antlers and Lowry had found a pair of bull elk sheds earlier. As Lowry ran down a draw, eventually they heard and then saw him.

“We hear Brady yelling, ‘Help me, help me, help me,’” Jackson said. “Finally we catch a glimpse of him running down and we go that way. When we meet up with him he says, ‘We’ve been attacked by a grizzly.’ “So we took the gun out of August’s bag and headed up that way.”

Lowry had called 911 as soon as he could while going for help. Jackson took the phone when they met him halfway up the draw. He helped organize a life flight, to “help them help us,” Jackson said.

“When Brady had come down, he said the bear had Kenny and he thinks Kenny might be dead,” Jackson said.

Jackson and Harrison resolved to go right back up despite the dispatcher telling them to get to safety and they would help Cummings. Jackson said that wasn’t even an option for them.

“We didn’t want just us three safe, we wanted all four safe,” he said. “It wasn’t a choice for us, we had to go get Kendell.”

So they had Lowry, blood soaking his sweatshirts from arm and leg bites, sit down where they were.

“My adrenaline was pumping and I was in and out of consciousness,” Lowry said.

The other two started walking back up the draw with Harrison out front and Jackson behind on the phone. They didn’t see the bear, but as they got closer to the trees, they saw Cummings walking down.

Getting off the mountain

“I was more focused on getting Kenny and didn’t feel comfortable leaving him up there,” he said. “I just remember running up the hill yelling for Kenny. It took a minute, then he finally yelped back to me. His head was highlighted in red with blood and he was making his way, limping down the hill. I remember how horrifying it was to see my friend like that.”

So Harrison ran to him and helped him get down the hill to the other two.

“I let him rest for a second, then said we had to get down,” he said. “He was losing a lot of blood. So I threw him on my shoulders.”

Harrison carried his friend and teammate for awhile, then Jackson took a turn. They reached a barbed wire fence, and he passed Cummings back over to Harrison. They were lucky, Harrison said.

“We see a Suburban looking for us, almost like it was scripted from a movie,” he said.

In the meantime, nearby landowners in a side-by-side helped the students make their way to the bevy of first responders waiting nearby. They transported Cummings by helicopter to Billings and Lowry by ambulance to Cody. He was later moved to Billings as well.

According to a Park County Sheriff’s Office release, first responders treated the victims while deputies began setting up a landing zone for the Guardian helicopter. They were given permission by a landowner to have the helicopter land in a hay field approximately 300 yards west of their location.

“Multiple persons came together in this scenario to assist these young men, preventing the outcome from being much worse,” said Sheriff Scott Steward, “we are lucky to live in an area where so many people are not only familiar with the outdoors, but are willing to step up and help when it is needed.”

Cody Region Wildlife Supervisor Dan Smith said department biologists collected hair samples from the scene, but didn’t have a lot of hope in positively identifying the grizzly. Reports from landowners and hunters indicate close to a dozen grizzly bears were using the area to feed in agricultural fields and bed down. Even if the department positively identifies the bear, the surprise attack wasn’t considered “predatory,” Smith said.

Game and Fish will continue to monitor bear activity in the area and work with the U.S. Fish and Wildlife Service to make management decisions.

With both victims in Billings, more members of the Trapper wrestling team came to visit Sunday. A few had stayed overnight in Billings Saturday to be with their injured teammates.

NWC wrestling coach Jim Zeigler said both of his injured wrestlers “won over” the hospital staff with their demeanors. And he and his wrestlers made sure both Cummings and Lowry were not alone as their parents made their way to Billings.

“I couldn’t be more proud of these young men, the way they looked out for each other and protected each other,” he said. “They wouldn’t have survived without each other.”

As they rallied around each other on the mountain, the college community has rallied around the four students involved. A fund has been set up to help pay for the medical expenses for Cummings and Lowry.

“I'm really proud of the NWC community in how fast everyone came together to show support for all of us,” Jackson said.

Zeigler said the college administration has been as helpful as can be, from vice president Dee Havig paying for the family of the victims’ rooms in Billings, to athletic director Brian Erickson’s help. He said president Lisa Watson talked with the parents of all four of the students involved.

Lowry was out of the hospital first, while Cummings was getting ready for discharge by midday Tuesday.

Both are eager to return to campus, but neither wrestler is ready for action.

Lowry, whose arm is in a sling after being broken by the bear’s bite, said his goal is to wrestle by the end of the season, which starts Nov. 5. And the avid hunter is still planning on a fall whitetail hunt in Idaho.

Cummings had to have gashes on his leg and bicep stitched up and his hands are in bad shape. He has 60 staples holding his scalp together and multiple stitches in his face to fix where his cheek had been ripped open.

“I got some pretty good cuts all over my body,” Cummings said.

Lowry required surgery where the bear had bit his arm, and injuries to his shoulder and thigh had to be tended as well.

All agreed that, as bad as it was, it could’ve gone so much worse if not for the work all of them did to help each other, and the work of the landowners and first responders who got both to the hospital.

“I think we were extremely lucky it went the way it did,” Harrison said.

All four were together again in Powell after Cummings returned to town on Tuesday night, with Watson greeting him in the locker room. Both have stitches and scars — Cummings’ phone was even punctured by a bear tooth — but both recovered quickly, ready to get back to their school and their teammates.

“We were just lucky to have all of us there,” Lowry said. “It’s a Northwest College wrestling miracle. We all had a part in it.”

(Mark Davis contributed to this report.) 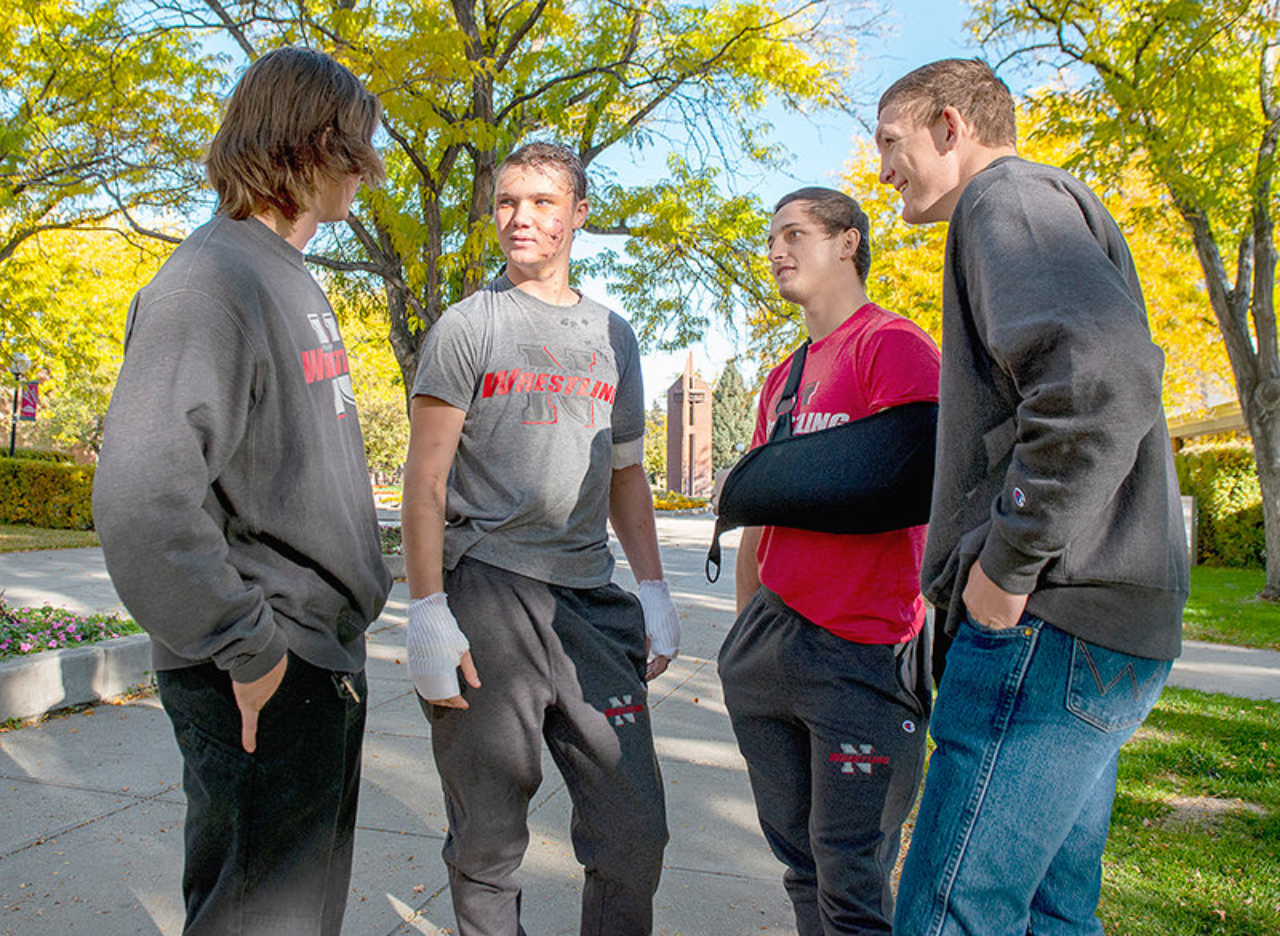 Around the region organizations and businesses are finding ways to help the Northwest College wrestlers mauled by the grizzly bear last weekend.