POWELL, Wyo. - Artistic reflections from a cowboy who spent many nights “under a blanket of starry skies” go on display Tuesday, Feb. 25, in SinClair Gallery.

“Joel Ostlind: Works on Paper” opens with a 4:30 p.m. artist’s reception in the gallery, located at the heart of Northwest College’s Orendorff Building.

"I am working through my slice of life,” Ostlind said, “savoring the atmospheric volume, watching the light change by the hour, the seasons shift day by day. The fun for me is trying to catch, in two dimensions, enough of what refuses to be caught so that as you stand looking at these images you will remember how the light really is, where the mountains are blue like that, why the songbird sings."

He says his story starts out much like that of any Wyoming cowboy. After earning a degree in soil science from the University of Wyoming and one in range management from Texas Christian University in the early 1970s, he couldn’t resist the wide-open spaces and simple lifestyle of a wrangler on the range.

He spent his first years after college in Texas, mending fence, lassoing livestock, riding the range, sleeping in bunkhouses or out in the open. His latent interest in art was rekindled when he received a Christmas present from his parents back in Wyoming. Tucked in the box among other gifts was a sketchbook.

The next “seminal moment” in Ostlind’s art career happened when he showed his drawings to a “big-city” art director who was on the ranch in Texas shooting ads for Marlboro cigarettes. The words, “You could do something with this” from the art director steered Ostlind down a new path.

"I knew I didn’t want to be working on ranches my whole life,” Ostlind said. “Because it is sort of a young man’s gig, the way we were doing it. So I really started trying to educate myself (in art), trying to pursue that."

He found a part-time ranch job harnessing a team of horses in the mornings to feed cows. He spent his afternoons in the library delving into volumes of works by the great masters.

He left ranching completely in 1990 to pursue a full-time career in art and now lives in Sheridan.

The Casper Star-Tribune’s Made in Wyoming feature on Ostlind credits the distinguishing element of his work to an on-the-scene approach to recording his characters’ nuances:

“Some of the paintings are actually created on the spot at brandings, where cowboys tend to revert to an unintentional pose between movements. Cowboys at work are gestural, rather than portraiture subjects, to Ostlind. He likes the real movements, the body at work. It’s the same undertone he brings to paintings and etchings of other figures, humans skiing the backcountry, fly-fishermen wading in a river, or livestock.”

Ostlind said he tries to convey his appreciation for Wyoming and the Big Horn Mountains in his work, "But I also try and do it in an open enough manner so that the viewer can sort of inject their own emotions and complete some of the imagery to their own satisfaction. If the imagery is left a little open to interpretation, it lives longer."

Ostlind has the distinction of being the first living artist featured in a one-man show at the Bradford Brinton Memorial and Museum outside Big Horn. He was the featured artist at the 2002 Coors Western Art Show and has exhibited there annually since then. Ostlind has also been featured in Southwest Art magazine.

“Joel Ostlind: Works on Paper” will hang in SinClair Gallery through April 4. The gallery is open from 8 a.m.-5 p.m. weekdays. Admission is free. 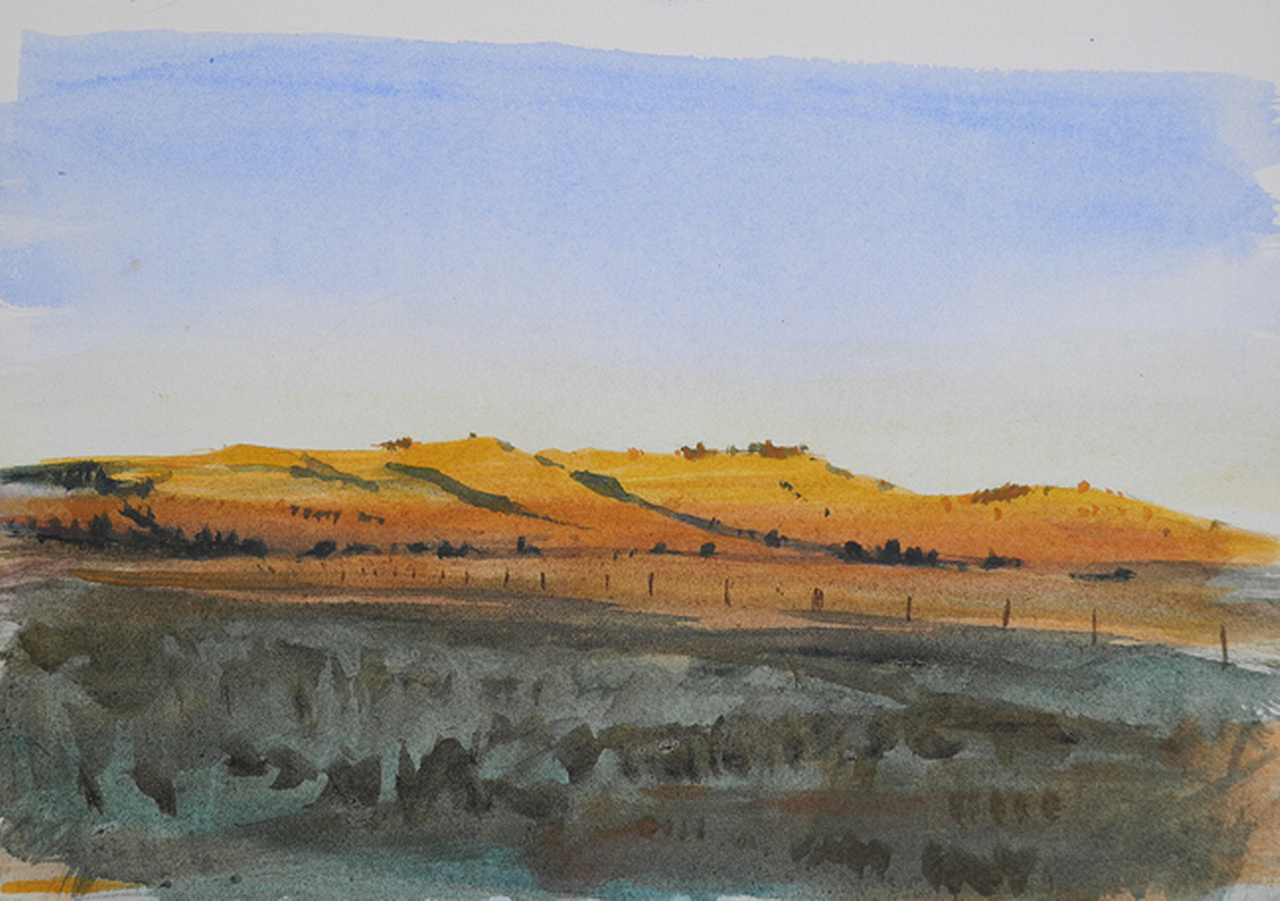 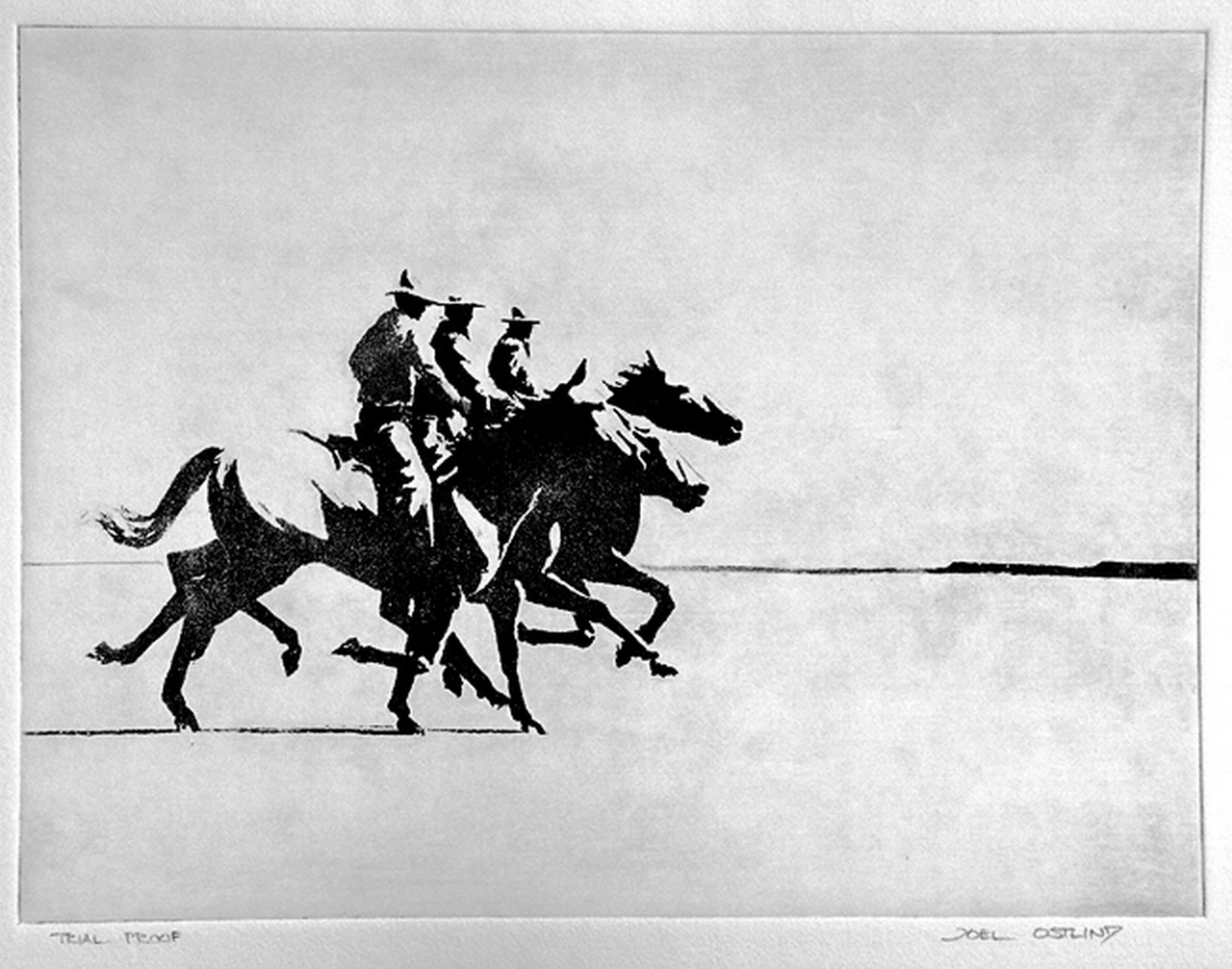