Northwest College continues to pride itself on its diversity, trailing only the University of Wyoming in the number of international students enrolled in the state in 2016-17.

“I love the fact that we have such a strong international program,” said NWC President Stefani Hicswa. “When I was first hired, I had a friend of mine from college call me and say, ‘You have one of the best international programs in the entire United States.’ He works as an international recruiter in Connecticut, and he knew about our program. So we’re known certainly throughout the U.S.”

“A huge part of what we do is programming and retention efforts,” Enriquez said. “Another big part of our job is to build that cultural awareness, not just by bringing students to campus, but bridging the gap between faculty, staff and the community.”

Enriquez and Ryf also oversee the Intercultural House, a home adjacent to the campus, purchased with a grant and renovated, providing a “home away from home” for international students.

“The Intercultural House has been a huge aspect of our jobs in terms of the programming we do in the house and the doors it’s opened for us in terms of opportunity,” Enriquez said. “This will be our third year with the house, and the difference it’s made to the students and the campus is amazing.”

Though it’s difficult to guess the number of international students that will be on campus this year until they actually arrive, Enriquez and Ryf estimate a similar total to last year.

“We’re looking at about mid-20s for new incoming students,” Enriquez said. “I think total, we’ll be in the low 60s.”

Adjusting to a new culture, with a different language, customs and sets of values, can be difficult for anyone; for a young college student, perhaps even more so.

“I would say the biggest challenges students face when they come to NWC is food and language,” Enriquez said. “A lot of them come from cultures and countries where the food, and even the times and how you eat, are completely different. And language of course, because a lot of them come to NWC to study and improve their English. Coming to a place where you can’t really be yourself or express yourself is quite hard.”

Ryf said the students’ grasp of the English language can vary, so programs are designed to cater to all levels of comprehension.

“There really is a range,” Ryf said. “We have some that are completely fluent, and then ones that are very much at the beginner level. We offer ESL classes and basic English classes for everyone.”

“We don’t have a hundred Saudi students or a hundred Chinese students,” Enriquez added. “A lot of our students are the only ones from that specific country. In that way, they’re forced to integrate and learn the language a lot faster.”

Though their job descriptions may appear to be pretty straightforward, Enriquez and Ryf’s responsibilities extend beyond a simple student-staff relationship. Words such as friend, mentor, surrogate family member and relationship counselor aren’t uncommon labels the two are handed throughout the course of a school year.

“We definitely provide the complete support for the international students while they’re here,” Ryf said. “Whether it’s needs related to academics and school or personal and health issues, we sort of become the office where they can find a shoulder to cry on or to share exciting news.”

‘Community has been absolutely fantastic’ The community itself has also been very forthcoming with making international students feel welcome, providing support in the form of host families and making sure international events are well-attended.

“We are extremely honored to be in a community like Powell,” Enriquez said. “The community has been absolutely fantastic to us. We do a lot of programming where we try to get the students involved in the community so we can integrate them not only in the classroom and on campus, but also in what’s happening in our community.”

The Friendship Family program involves matching international students with local families based on similar interests. Interacting with their host families gives the students an opportunity to enjoy things like a homecooked meal in a familiar, homey setting.

“The students get together with their family, maybe once a month to have dinner, go to a sporting event, go to a movie, something like that,” Ryf said. “It helps the student get integrated into the community while helping the community learn about another culture. It’s been a really good experience.”

Ryf said they are always looking for families to participate in the program; those interested are encouraged to contact Ryf or Enriquez for more details.

“We define a family as someone who wants to spend time with an international student,” Ryf explained. “It can be a whole family, or just one person who wants to take the time to get to know one of our students.”

‘A friendly and safe environment’ Nicola Waddell looks forward to the opportunities attending NWC will provide as she plans for life after college.

“I believe Northwest College will provide more opportunities to better myself both in college and soccer than I would have at home,” said the soccer player from Scotland. “I also believe it will make me more culturally aware and prepare me to make wise choices in the future.”

A number of variables factor into which school a student chooses to attend. Enriquez said the reason NWC has become a popular choice among international students comes down to a combination of recruiting, cost and location.

“Lower cost definitely enables us in the recruiting process,” she said. “But for us it’s just the community, the environment. We can go into a recruitment and tell the student that they’re coming into a friendly and safe environment. I think parents really like the idea that there aren’t that many distractions here for their kids, and that we have a staff that will keep an eye on them.”

Add to that the endless opportunities for outdoor adventures the area provides and NWC becomes a very attractive option.

“The hiking, the camping, being so close to Yellowstone is very attractive to our students,” Enriquez said.

Carlos Felgueroso Alvarez, a soccer player from Spain, chose NWC after hearing positive things about playing in the U.S. from friends.

“I have some friends that are playing sports for different universities in the U.S. and they told me it is a good experience,” he said. “I tried for it and now I’m here, very happy and excited to play soccer and win matches for NWC.”

For Ryf and Enriquez, the most gratifying aspect of their jobs is watching the international students blossom, both culturally and academically, during their time at NWC.

“Watching them graduate and walk across that stage, it’s just such a sense of fulfillment knowing that they made it, they accomplished what they came here to do,” Enriquez said. “Just seeing how they’ve changed and how they look at the world so differently, how NWC and Powell became a part of who they are.”

“It’s hard for anyone to go to college and graduate,” she said. “But trying to do it in a different culture in a language that’s not your native language, taking college-level classes, what they’ve accomplished is really great.” 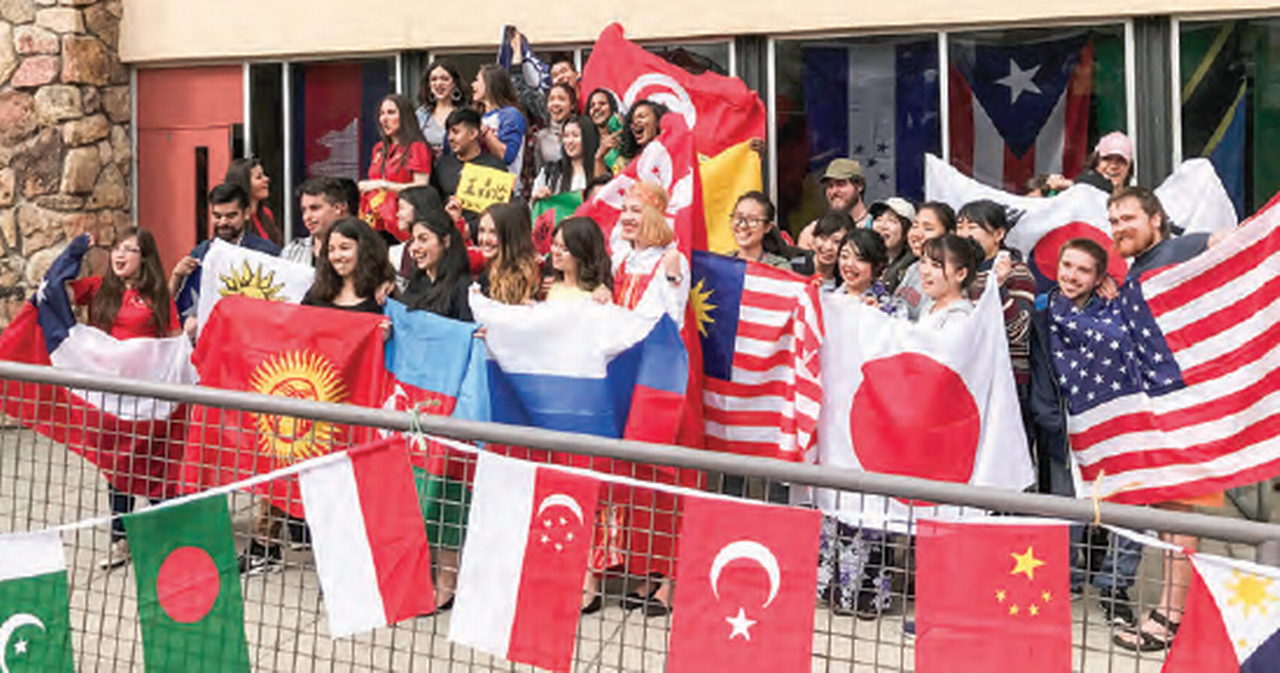 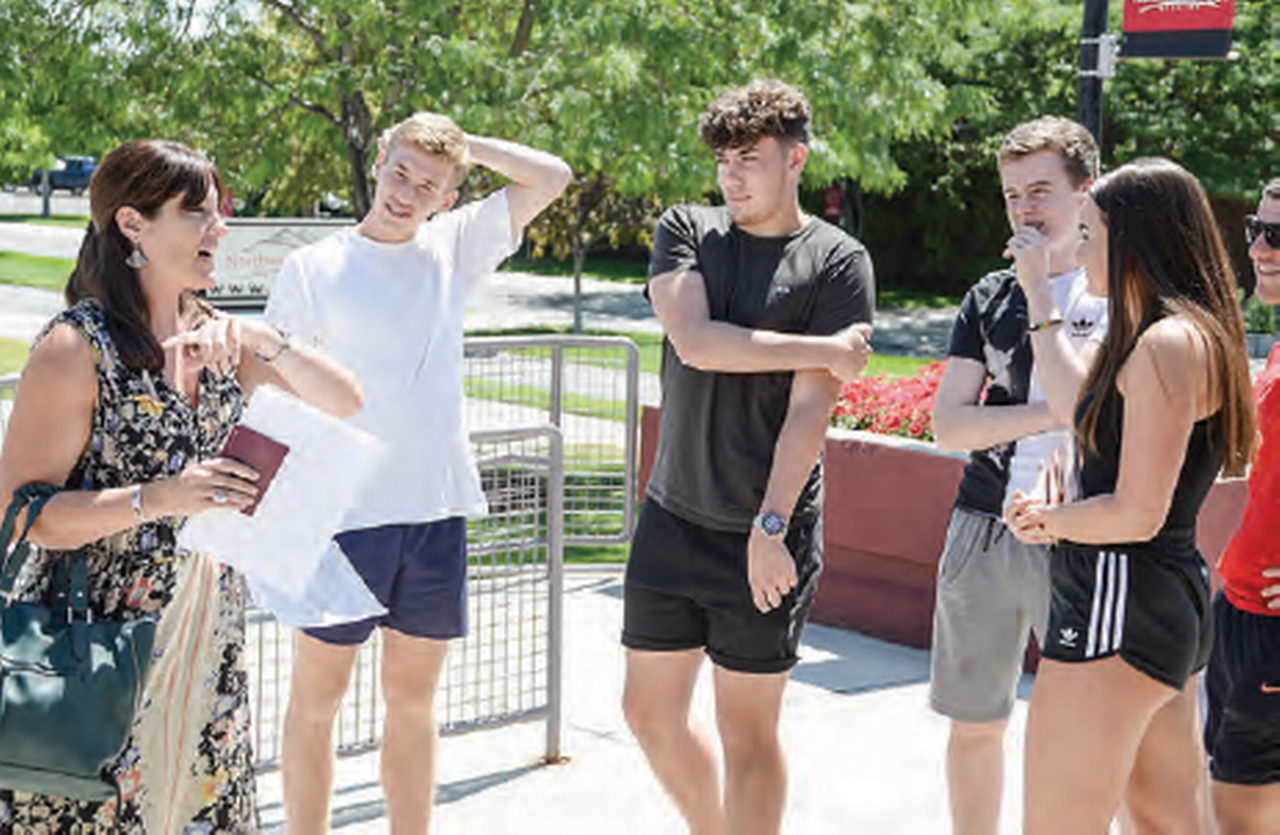