POWELL, Wyo. - Those comic "Pirates of Penzance" set sail on the stage of the Nelson Performing Arts Center in Powell for a three-day run beginning Friday, April 17. The curtain rises at 7:30 p.m. for the Friday and Saturday performances and at 3 p.m. for the Sunday, April 19, matinee.

The Northwest College production with its 16-member cast is directed by Jan Kliewer, an assistant professor of music. "This is definitely a show you'll come away from humming tunes," Kliewer said. "The Gilbert and Sullivan operettas are almost a genre in and of themselves, and this is the most well-known of all."

As with other operettas by the famous duo, "Pirates of Penzance" parodied the contemporary setting of its time, which was 19th century English society. "What's ironic about this one," Kliewer said, "is that they finished writing it after traveling to New York. It's the only Gilbert and Sullivan operetta that was completed on American ground. And it was first performed in New York to enthusiastic audiences."

The most obvious parody, according to Kliewer, rests on the shoulders of Major-General Stanley, pointing to the formality and pompousness of the British military, which in the 19th century was still a "gentleman's avocation." Based on a real person, the character demonstrates his culture's larger-than-life sense of honor and duty by issuing a little white lie that Kliewer says "was a small and very practical falsehood that nevertheless torments him throughout the play."

The pirates themselves become a satire on the reigning perception of pirates during the 1800s. The Penzance pirates' rise to the House of Peers was not a likely aspiration for the ilk they were based upon.

And at the heart of the whole adventure is a jab at the English language and its predisposition for confusion: the hard-of-hearing Ruth, after all, apprentices the young hero, Frederic, to a pirate instead of a pilot, setting in motion the whole unlikely tale.

The story takes Frederic from his pirate upbringing and first encounter with beautiful girls on the day he vows to abandon his pirate life, to clashes between his seafaring compatriots, the police and Major-General Stanley.

With only two scenes, the play is minimally set. The focus rests purely on the actors, who are lavishly decked out in period costumes. And since it's sung entirely in English, Kliewer keeps a tongue firmly planted in cheek when he says, "We're hoping not to need subtitles."

The role of the pirate king is played by Thain Bertin of Colstrip, Mont. The baritone is already a veteran of Rimrock Opera productions, most recently as a member of the chorus in "Carmen." A freshman, Bertin is getting an early start on the career he aspires to in opera and musical theater. 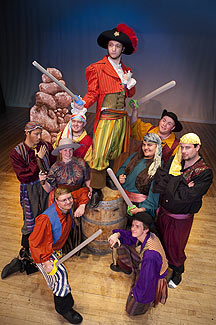 In the Friday and Sunday performances, the heroine Mabel is played by Sara Ricord of Rock Springs. Another familiar voice to Rimrock Opera fans, Ricord has risen above the ranks of chorus into title roles on a few productions. A sophomore vocal performance major, she, too, aspires to a career in opera.

Sadie Lewis of Auburn, Wyo., takes on the role of Mabel for the Saturday show. This will be the sophomore soprano's first foray into opera, although she's previously done musical theater.

The role of Frederick is handled by Cody's Vernon Ward. This is Ward's first attempt at musical theater, but Kliewer says he's doing a great job of playing a believable hero, who in this case, unfortunately, doesn't have much in the way of grey matter holding up his pirate's hat.

Misha Mabey of Casper is cast in the role of Ruth, the cause for the whole mess involving the pirates. The "piratical maid of all work" tragically hears "pirate" instead of "pilot" when she's told to apprentice Frederic, her young charge. "The great thing about Misha," Kliewer said, "is that she comes honestly to this role. She's a great fan of opera and has dreamed of playing this part since she was a small girl."

Kliewer predicts theater goers will find delight in the most famous of the operetta's characters, Major-General Stanley. Not only because of the lines from his famous aria, "I am the very model of a modern Major-General, I've information vegetable, animal, and mineral," but also because of the unlikely candidate who will portray him during the Friday and Sunday performances: Jun Terasaw from Japan.

"This role is challenge enough for a native speaker," Kliewer said. "There's lots of language that's dated and colloquial, and some of it has to be delivered at break-neck speed. For someone who speaks English as a second language, it's the supreme challenge. Jun's pronunciation brings a special humor to the role."

Alex Solis of Newcastle steps into the role of the major-general on Saturday, bringing a more traditional baritone rendition.

"The two play the part very differently," Kliewer said. "Some folks might want to come twice just to hear them both."

Other named roles are filled by Michael Lechner of Fairview, Wyo., in the part of Samuel, the pirate's first mate; Beth Smith and Mandy Asay of Laramie and Kallie Kent of Dillon, Mont., as daughters of the major-general.

The chorus of pirates, police and General Stanley's daughters are played by Ben Rush of Cody, Pat Smith of Lovell, Cody Sheldon of Meeteetse and Abby Christiansen of Powell.

General admission to each performance is $7. Students and children age 12 and under pay $3.