In collaboration with The Committee on Faculty Development and Morale and the office of College Relations, the TLC is excited to showcase the great work of Northwest College's educators! In this faculty spotlight series, we will feature members of our faculty that are recognized by nominations from their peers based on demonstrated excellence in teaching, mentoring/advising, service, or scholarship. Spotlights will also be promoted by the Marketing, Communications & Web office in a variety of media.

For Northwest College associate professor Amy McKinney, history is not something to simply be learned from a textbook and memorized. Instead, vibrant visions of the rugged American frontier and trailblazing women of the West are brought to life in her class.

As a fourth generation Montanan, McKinney has always been passionate about inspiring the next generation of historians, but this year is particularly important to her.

“The Wyoming Office of Tourism has declared 2019 the Year of Wyoming Women because the state’s gearing up to celebrate the 150th anniversary of women’s suffrage,” she explained.

Whether it’s presenting at conferences, researching or teaching, much of McKinney’s work in recent years has prepared her to share this historic landmark with her students—particularly those in her Women of the West class. McKinney received a grant from the American Heritage Center in Laramie and is currently using their archival material on Wyoming women in the course this semester.

As part of the course, students will host a series of public presentations throughout the fall semester featuring Wyoming women from a variety of occupations.

“The big culminating event at Northwest College will be December 10th, which is the official 150th anniversary. The students will present their research, the audience will vote on their favorite and the student who gets the most votes will win $150 dollars,” she said.

“One aspect of the Women of the West class I really enjoy is looking at the intersection of race, class and gender—the power structure among women because I think that sometimes gets lost. Not all women have the same experience in the West.”

McKinney’s passion for western women’s history is also the focus of her own research and writing.  She’s focused her attention on one individual in particular and is currently writing a book based on archival research, including a lengthy series of letters.

“Harriette Cushman was a woman in a man’s job in agriculture. She was the first woman to be in charge of a topic specialty outside of home demonstration in the Extension Service.” She served in Montana from 1922 to 1955.

Although she had a lengthy career with the Extension Service, Cushman did not intend to go into the poultry business. In fact, when she went to college, she wanted to be a writer—she loved poetry and literature but showed more aptitude for the sciences. After graduating in 1914 with degrees in chemistry and bacteriology from Cornell, Cushman was looking for a career—she had no interest in “just a job.”

“Everything she did, she went in one hundred percent and she became a very well-respected poultry specialist. Harriette was very much an intellectual and woman ahead of her time in a lot of respects. She really was someone who understood her place in the world—she was fearless.”

As the semester has progressed at NWC, McKinney quickly learned that her students are equally excited for the upcoming Dec. 10 anniversary.

“I have a really good group of students—they’ve already started talking about what collection [from the American Heritage Center] they want to look at. It’s really exciting to have our students at Northwest College be part of the 150th anniversary because it’s a big deal.”

While McKinney and her students have their individualized interests, the group is leaving no stone unturned when it comes to exploring the breadth and depth of the Wyoming woman. As they delve deep into each collection from the American Heritage Center together, students will uncover the lives of innovative problem solvers who were true pioneers in their fields—women who were farmers, ranchers, writers, postmistresses or teachers and allowed their restless curiosity and independence to propel them into a robust career.

As NWC’s Women of the West class begins planning the series of public presentations, stay tuned for additional details. All upcoming events are free and open the public.

“It’s fun to show the community what great students we have here,” McKinney said with a smile. 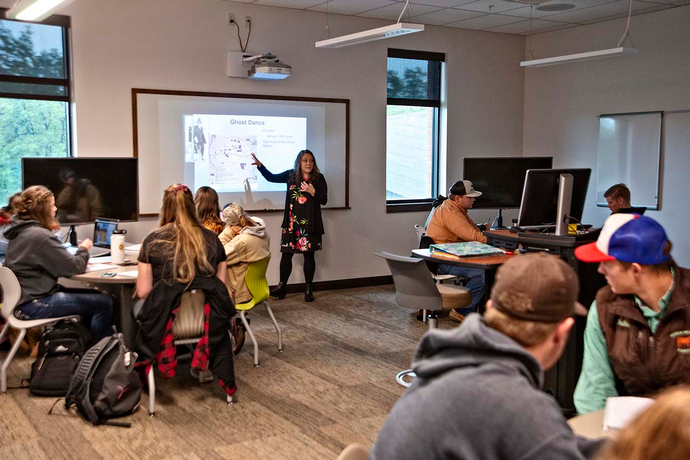